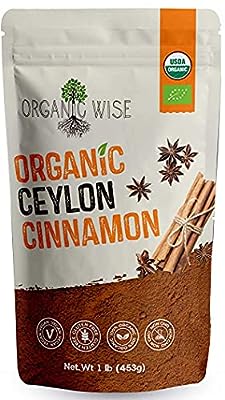 View eBay Options
In Stock.
Product Information (more info)
CERTAIN CONTENT THAT APPEARS ON THIS SITE COMES FROM AMAZON SERVICES LLC. THIS CONTENT IS PROVIDED 'AS IS' AND IS SUBJECT TO CHANGE OR REMOVAL AT ANY TIME.

Many users of Ceylon Cinnamon have had positive results in controlling there blood sugar. In fact Several studies have found that Cinnamon has properties that help those with insulin resistance.Ceylon Cinnamon is the cinnamon more closely associated with the potential health benefits involving blood sugar regulation.It is particularly popular because it has low levels of Coumarin compared to Cassia Cinnamon found in your grocery store. In case you did not know, Coumarin in high doses can cause liver damage.Excessive intake of coumarin over a prolonged period of time can pose health risks. While the level of naturally occurring coumarins in Ceylon cinnamon appears to be very small and lower than the amount that could cause health risks.Our Ceylon Cinnamon has Ultra Low Coumarin Levels, between 2-5 ppm of coumarin,compared to Cassia, which is 2000-5000 ppm.This is the REAL Cinnamon. Not the imitation stuff you get at the supermarket.Good choice if you care about your health. Both the TASTE and AROMA of Ceylon Cinnamon is different then that of Cassia Cinnamon, which is the cinnamon we are used to tasting as it is 99% of the store bought cinnamon in the US.Most people absolutely love the taste and aroma of our ceylon cinnamon,which can be described as a REFINED,FRAGRANT,EXOTIC aroma with a COMPLEX,SWEET, taste compared to the taste of Cassia Cinnamon. It has a more earthly,exotic smell and taste, and the flavor is complex in comparison with regular and commonly available commercial cinnamon, which can be described more like Red Hots candies .A tiny percentage of people do not like the taste of Ceylon Cinnamon because they are used to the taste of Cassia Cinnamon and can't get past the fact that True Cinnamon just tastes and smells different.And for many others it is an aquired taste as people learn that Ceylon Cinnamon is the best choice for your health.DOES NOT DISSOLVE in WATER To keep your cinnamon fresh and protected against oxygen, sunlight, mositure and heat, our cinnamon is packed in a high quality, resealbale, stand up pouch. Nothing can be more frustrating then having torn bags lying around in your pantry and our ziplock seal enabales you to easily open and close your pouch and not have your cinnamon spilling by not being sealed properly. Our stand up pouch gives you the flexibility of easy storage unlike continers and jars. Packaging is very important in keeping your cinnamon fresh which is one of the reasons that poorly packed ceylon cinnamon can get a bad rap for having no taste and smell. Our ceylon cinnamon is both flavourful and aromatic compared to many of the poorly packed ceylon cinnamon on the market.The other reason for our superiority is explained below When you receive our Ceylon Cinnamon you can be assured that this will be the freshest cinnamon possible. Our cinnamon is from the latest harvest and only imported in small quantities so you do not have to worry that the cinnamon has been sitting around for a long time in a warehouse or store shelf. Our USDA certified Organic Ceylon Cinnamon is the highest grade available , so we don`t have to dilute it with filler or any other types of cinnamon. Some competing Ceylon Cinnamon products are either stale tasting or have no flavor at all as they were either imported in large quantities and have been sitting around for a while or were of a lower grade of Ceylon Cinnamon. Even if it says organic there can be quite a bit of difference in the taste due to the different grades in quality. Rest assured that our Ceylon Cinnamon is the highest grade available.IMPORTED DIRECTLY FROM SRI LANKA.If the Ceylon Cinnamon doesn't say where its from on the packaging chances are it is not from Sri Lanka. Believe it or not, some Ceylon Cinnamon comes from other countries besides Sri Lanka.Ceylon is the former English name given to Sri Lanka, by the British. Ceylon Cinnamon from anywhere else is not genuine for obvious reasons.Our Ceylon Cinnamon is harvested from a USDA certified farm in Sri Lanka. They follow the strictest conditions in order to comply with the USDA regulations. The Ceylon Cinnamon is NON IRRADIATED, SALT FREE, SODIUM FREE, NON GMO.

There are no customer reviews yet. Be the first to Write a Review!

The Best Products on eBay

Cookies help us deliver our services. By using our services, you agree to our use of cookies. Learn More Accept

Wait! We have something for you...

Don't leave empty-handed! Simply enter your email below and we will send you a great discount on our products:

We hate spam as much as you do! Your details are never shared and you can unsubscribe at any time.